Whether you are from North, Central or South Jersey, Pork Roll, Egg & Cheese is the ultimate Jersey breakfast and late-night diner sandwich. 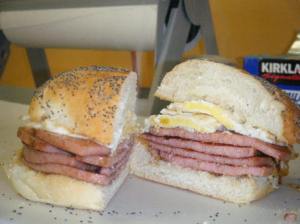 From what I hear it’s almost impossible to get outside of the tri-state area – what will I do if I ever move?  It’s a heart attack on a plate that I prefer to enjoy (no matter the time of day) with a side of french fries and brown gravy (on the side, of course).

This morning was no exception.  I can’t figure out why I would snarf such a giant calorie fest when I have to put on a bikini in a little while.  I guess I’m just a masochist or a Jersey Girl – probably a little of both.  The extra side of sausage was just an unnecessary evil but I couldn’t resist – I’ll be stuffed until dinner.

Pork Roll, Egg & Cheese even tastes great at 4 am after a serious night of clubbing and drinking.  It takes the drunk edge off but can sometimes drive you to the porcelain god if you’re not careful.

I tried to make it at home many times but it NEVER tastes as good as the diner’s.  Maybe it’s the melted yellow, American cheese or maybe it’s the greasy griddle that it’s cooked on.  I don’t know but it’s one of my go-to food splurges.

If you’ve never indulged in this Jersey wonder, I recommend you do so as soon as possible.  It’s a little taste of Jersey that will probably stay with you all day!

What do you think?

Hark! Who goes there?

This work by CultureChoc2010 is licensed under a Creative Commons Attribution-NoDerivs 3.0 Unported License

© CultureChoc2010, 2010. Unauthorized use and/or duplication of this material without express and written permission from this blog’s author and/or owner is strictly prohibited. Excerpts and links may be used, provided that full and clear credit is given to CultureChoc2010 with appropriate and specific direction to the original content.

This Blog Is Protected